Here's an overview of features and functionality for Sestra's Model-C touchless taps, typically used for carbonated and sparkling beverages.

The different models of Sestra's patented Touchless Taps are specifically designed for the beverages they dispense. Model-C Touchless Taps are designed to create a smooth pour for carbonated beverages, such as beer and sparkling wine, while keeping the pressure constant in the line.

Design of the Model-C taps

The Model-C taps feature a barrel on the front that is designed to keep pressure constant in the line, not allowing air to enter or escape the tap. 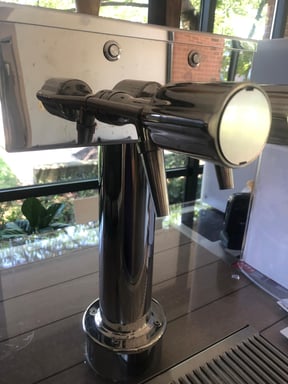 These taps require air pressure to open and close. The air (or gas) flows through the air tube found either on the side or the top of the tap.

What if the air tube is separated from the tap? If the tube separates from the tap at the joint (indicated in red above), gently but firmly reinserted into the fitting. If done properly, the air leak will stop and the tap will start pouring properly again.

Warning: It is important to avoid damaging or moving this tube. Any damage to the air tube will break the tap and affect beverage pours. You can tell if the tube is damaged by listening for an air leak coming from the tap.

Here is a video of what a damaged tube looks like - you'll see how the fitting has completely detached from the back of the barrel: